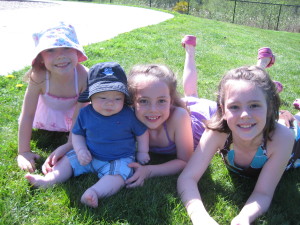 Five years ago, Alex became the CASA volunteer for three siblings: Abigail (age 7), Madison (age 5), and Rachel (age 1).  The children were removed from their mother’s care because she abuseddrugs and brought criminals into their home. Two years later, Alex took on advocacy for one more when the mother gave birth to little brother Gavin.

Over their five years in foster care, the children were moved between several different homes, including one in which Gavin was abused by his foster parents. Their case worker changed. But the CASA volunteer Alex remained the one stable person in the children’s lives. He looked forward to his monthly visits when they would all have fun playing together or going to baseball games. The children knew Alex cared about them, and as they grew older, they also came to understand that he was speaking up in court for what was best for them.

The Department of Human Services gave the children’s mother, as well as the father of the youngest two, many opportunities to become safe, sober parents. Gavin returned to his mother’s care for a short time while she was in residential drug treatment, but then she relapsed. The father was in and out of prison. Alex consistently voiced his opposition toward returning the children home, and finally the mother and father’s parental rights were terminated.

The last step was to ensure the children were adopted by loving parents. It was not an easy task to find the right home where all four children could stay together. Alex served on the adoption committee, and supported the selection of a young couple. The adjustment was difficult for the new parents at first, as Rachel and Gavin both had significant behavioral and emotional issues. But the parents were committed to the children who had already grown to love them. The adoption has now been finalized, and Abigail, Madison, Rachel and Gavin arethriving with their “forever family”.

NOTE: Abigail, Madison, Rachel and Gavin’s story is real, but their names and picture have been changed to protect their identities.

Just like any other job, some weeks you’re just waiting to get the ball back…