“While sitting at juvenile court, I never got a night’s sleep without waking to wonder if at least one decision I made that day had been the best for a child. It struck me that it might be possible to recruit and train volunteers to investigate a child’s case so they could provide a voice for the child in those proceedings, proceedings which could affect their whole lives.”

In 1977, Judge Soukup conceived the idea of using trained community volunteers to speak for the best interests of abused and neglected children in court.  So successful was this program that soon judges across the country began utilizing citizen advocates.  In 1990, the US Congress encouraged the expansion of CASA programs with the passage of the Victims of Child Abuse Act.

In 1995, CASA of Lane County was founded to serve abused and neglected children age 0-17 in Lane County.  In 2004, the organization was the first program in Oregon to successfully complete the National CASA Certification process.

Currently CASA of Lane County serves more than 400 children annually with well over 200 volunteers and 17 staff. 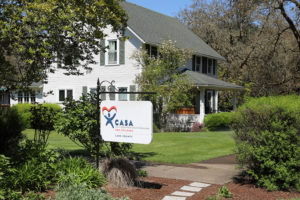 Please Share This
A child is waiting on you! Please become a powerful voice for a child who has experienced child abuse and neglect.
Volunteer
Copyright © 2010-2020 CASA of Lane County | Eugene and Springfield. All rights reserved. Privacy Policy | Disclaimer
Website developed by Partnered Solutions IT | Designed by Ruby Porter Marketing & Design