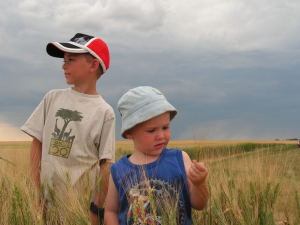 Two brothers, Adrian (18 months) and Cyrus (4 years old), were taken into foster care when their mother was arrested for involvement with drugs. Like many other children removed from their homes, Adrian and Cyrus’s path easily could have led to adoption. But their mother did not let that happen. She followed through on every requirement the court gave her. She successfully completed drug treatment and has remained drug free for the past year and a half. She recognized that it was critical to ask for help rather than struggle alone, and she reached out and found ongoing support from her parents, her counselor, and the DHS caseworker.

During their time in foster care, Adrian and Cyrus had four different caseworkers and several different counselors. But they had the stability of just one CASA volunteer, Mary. Mary visited with Adrian and Cyrus regularly, monitored the mother’s progress, and ensured the boys’ case continued to progress as quickly and smoothly as possible despite the caseworker turnover. Mary calls the mother’s efforts to turn her life around nothing less than “heroic”.

Adrian and Cyrus have now been reunited with their mother. The family has moved to a nicer neighborhood. Adrian is healthy and happy, having overcome a medical issue he suffered as an infant. Cyrus is doing well in school, has become active in sports, and is making good friends.

NOTE: Adrian and Cyrus’s story is real, but their names and picture have been changed to protect their identities.

Some weeks, you’ll have a packed schedule. Other weeks, you may have just one email…