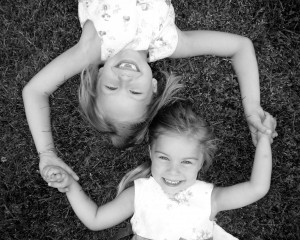 After four years in foster care, Angela (age 8) and Rebecca (age 6) have been adopted by their foster parents. It was a long road for these sisters…2 Judges, 6 DHS case workers, 3 counselors, 5 addresses, 2 churches, 3 schools, 6 teachers, 4 doctors, 2 dentists…and 1 CASA volunteer. Michael, the CASA volunteer, knew Angela and Rebecca better than anyone else on the case. He would visit with them weekly, and would attend their birthday parties and graduations. When he came to visit they would run up to greet him saying, “He’s my CASA!”

Flashback four years ago to when Angela and Rebecca were removed from their parents’ home. The girls witnessed domestic violence and substance abuse, and were allowed to walk far from home unsupervised because their parents thought – at ages 2 and 4 – they were old enough to take care of themselves. Their home had hardly any food and no way to wash clothes. Rebecca had nearly all of her teeth pulled because of poor dental care.

When Michael was appointed to be Angela and Rebecca’s CASA volunteer, their mother was reporting to DHS and the court that she was completing all necessary services. DHS was preparing to return the girls home. Michael began investigating. He discovered the mother was not living where she said she was, and was not in fact attending Alcoholics Anonymous meetings. She said she was taking college classes, but when Michael talked with the registrar he found she was never enrolled. Michael shared all his findings with DHS and the Judge. The mother’s parental rights were soon terminated.

The girls’ father, who had been out of the picture, suddenly stepped up and started drug treatment. Michael was hopeful. He spent time monitoring the father’s progress, talking with his counselors, and even eating dinner at the restaurant where the father worked. The father appeared to be successfully turning his life around. But two weeks after the girls returned to his home for a trial stay, the father relapsed. He began to steal money. Angela and Rebecca were moved back to their foster home.

By this point, Angela and Rebecca had been part of the foster parents’ lives for so long that the foster parentsdecided they wanted to adopt the girls. The girls were thrilled to change their last name and finally have their “forever home”. Now they are excelling in school and their behavioral issues have disappeared. Angela and Rebecca still reach out to Michael, inviting him to dinner and wanting him to remain a part of their lives.

NOTE: Angela and Rebecca’s story is real, but their names and picture have been changed to protect their identities.

Joshua was brought into foster care at age two with bruises and broken bones. Joshua’s…