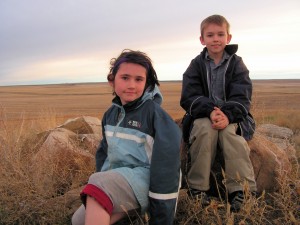 Joshua (age 12) and Jackie (age 10) are now safe and stable in the permanent guardianship of a relative. Jackie expresses a desire to be happy in life, and Joshua is a smart kid but tends not to show it. Each child is great with pets and able to connect with peers and teachers in their own special ways.  Both children struggle with problem solving and managing their anger appropriately.

Joshua and Jackie were regularly exposed to both verbal and physical abuse between their parents. After one particularly bad fight, the father left, Joshua went to live with extended family, and Jackie and her mother were left on their own. The mother became depressed and ultimately tried to end her life. Jackie found her mother overdosed on pills and sought help that saved her mother’s life that day.

Joshua and Jackie were placed together into foster care and Rick was appointed to be their CASA volunteer. Rick visited the children regularly to build a relationship with them, learn about their needs, and advocate for their safety and well-being. As a former school administrator, Rick was able to help navigate Joshua’s learning plan as he started a new school. Rick pinpointed certain issues that Joshua was experiencing, and as a result Joshua, his teachers and counselors were ready and eager to work as a team.

The children lived in three different foster homes before a relative decided to become the permanent guardian for Joshua and Jackie. Joshua and Jackie still maintain a relationship with their mother and other family members, and are thriving in their new home.

NOTE: Joshua and Jackie’s story is real, but their names and picture have been changed to protect their identities.

Personal experience created a spark, but changing lives is what fuels Mo Young’s passion for…

David lived in constant fear. Every boyfriend that entered his mother’s life was abusive and…