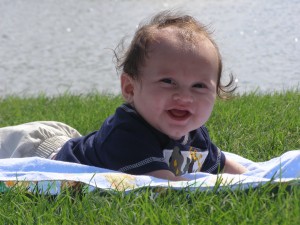 Owen was removed from his mother at birth and taken into foster care. His father was absent, and his mother struggled with drug abuse. She was not able to follow through with treatment services.

During Owen’s year in foster care, his CASA volunteer Rick was the only person who stayed constant in his life. Owen was bounced among three different foster homes. His Department of Human Services case worker changed, as did all of his other service providers. Through it all, Rick visited Owen regularly, made sure Owen was getting everything he needed, and kept track of all the details of Owen’s case.

Rick took pictures of Owen to share with the Judge, to connect Owen’s little face to his name and case number as the Judge decided his future. These pictures also helped Owen’s out-of-state relatives, who wanted to adopt Owen, to start bonding with him before they met him. When Rick met the relatives, he saw they were wonderful, loving people. Now Owen is 15 months old, has been adopted by his relatives and is doing well.

NOTE: Owen’s story is real, but his name and picture have been changed to protect his identity.

Ian and Alexander, ages 2 and 4, have been adopted together by a relative after…

Sometimes being a volunteer can be overwhelming. OK, not sometimes. There will come a time…

Personal experience created a spark, but changing lives is what fuels Mo Young’s passion for…