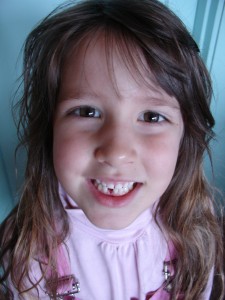 Stephanie was 6 years old when her mother dropped her off with her father – and never returned. Shortly afterwards, the mother was arrested following a multi-state crime spree and was sent to prison. Stephanie lived with her dad for a few years, surrounded by drug use and dealing, before she was removed from the unsafe environment and placed into foster care.

Jessica was appointed to be Stephanie’s CASA volunteer. She developed a strong relationship with Stephanie through regular visits to her foster home, where Stephanie was fortunate to have wonderful foster parents. Jessica could see that Stephanie was smart and intuitive, with a good sense of herself and a level head.

Stephanie’s half-sibling was also living in foster care, on his way toward adoption. Jessica advocated for the importance of keeping the children connected to one another, and to this day, they still see each other almost daily. Jessica built connections with everyone involved in Stephanie’s case – the caseworker, lawyers, and treatment providers – and maintained an open and objective perspective in order to make the best possible recommendations to the judge.

While in prison, Stephanie’s mother began to make dramatic changes in her life. She not only attended all the classes mandated by the court, she also completed many other classes like anger management to help her become a better parent. She worked for and received her high school diploma. Throughout these positive changes, Jessica supported and acknowledged the mother’s efforts.

Jessica remained as Stephanie’s CASA volunteer until Stephanie was happily returned home to her mother. Jessica’s mother enthusiastically and gratefully reunited with her daughter, and the two are doing well together.

NOTE: Stephanie’s story is real, but her name and picture have been changed to protect her identity.

Some weeks, you’ll have a packed schedule. Other weeks, you may have just one email…

Last week, I shared the challenge facing many older kids in our program, and in…

After four years in foster care, Angela (age 8) and Rebecca (age 6) have been…