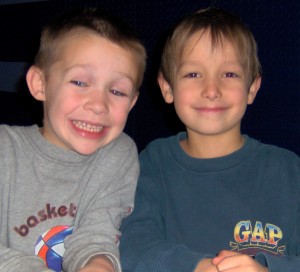 Travis (7 years old) and Tyler (8 years old) are brothers who are full of adventure, sweet and kind by nature. They were neglected most of their toddler years, failing to receive the love and attention they needed to thrive. Both parents abused drugs and alcohol, and their father also sold narcotics.

Travis and Tyler’s parents were separated, and – up until three years ago – had equal custody of their sons. At that time, the boys were visiting their father when the police arrested him for dealing drugs. The boys were taken into custody. Their mother was deemed also to be an unsafe placement, and the boys were put into foster care.

Tasha was appointed to be Travis and Tyler’s CASA volunteer. As she visited them regularly, she saw they were doing well in their caring yet structured foster home. Soon, however, they began to display behavioral issues such as lying and being destructive. Tasha recognized they would do better with a different home environment, and advocated for the boys to be moved. She also monitored the parents’ progress through drug and alcohol services and reported to the Judge that both parents were maintaining sobriety.

After spending nearly two years in foster care, Travis and Tyler were returned to their mother’s care. But she was not able to maintain safe and stable housing for her sons, and discontinued her involvement with counseling and drug and alcohol services. During this time, Tasha could see that the boys’ father had made great strides toward becoming a dependable, stable parent. He had finally begun family counseling, and had remained sober for several years. The Judge agreed with Tasha that the father and his new wife had established a home that would be safe and healthy for the boys.

Travis and Tyler are adjusting well to living permanently with their father and stepmother, and are developing a deeper bond with their family. Their mother continues to be involved in their lives. Both boys receive regular counseling, helping them to manage their emotional outbursts, and are being well-supported in school as their academics improve.

Seven-year-old Devan was taken into foster care due to his father’s erratic behavior, methamphetamine and…

This week was pretty quiet. Well, it was quiet for my CASA case because I’ve…

Julia, who had suffered from abuse at a young age, first met Christine when she…